Warning: Use of undefined constant HTTP_USER_AGENT - assumed 'HTTP_USER_AGENT' (this will throw an Error in a future version of PHP) in /home/tfcasum1/public_html/wp-content/themes/tfca-new/header.php(190) : eval()'d code(1) : eval()'d code on line 1
 12 Million Dollar Commitment for Species Protection - 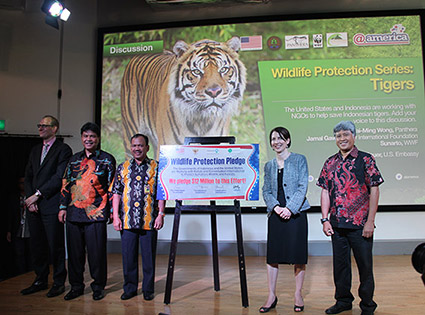 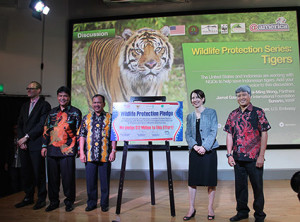 The United States government and the Indonesian government agreed to provide funds of 12 million dollars mainly aimed for tiger and rhino protection program and their habitat preservation. The funds are derived from the agreement under debt for nature swap between Indonesian government and the United States government. A number of funds that should be returned to the American government as part of debt payment is added to the special account of Tropical Forest Conservation Action Sumatera program  (TFCA-Sumatera) which is currently underway in Sumatra with the same funding scheme.

At the launch event held at @america (1/10), Kristen Bauer, Deputy Chief of Mission of the Embassy of the United States stated that the Government of Indonesia and the United States are equally concerned with the protection of endangered species in Indonesia, especially rhinos and tigers. “The reason why we focus on tiger because the tiger is suffering from unplanned strategy development program and illegal trade. Illegal trade not only affects the extinction of various species of animals but threaten border security, economic development and public health “says Kristen Bauer.

On this occasion, Raffles B. Panjaitan representing the Secretary General of the Ministry of Forestry  said that the Indonesian government has been running a series of responses to the protection of Sumatran tigers. A total of 5 projects with various donors including the ASEAN countries and the United States has run a good conservation of tigers and their habitats through conservation in situ and ex situ.

The additional funds for species conservation in Sumatra will be channeled as grants to local NGOs. This agreement allows the two countries to work together to protect, including law enforcement for crimes against key species  like tiger, rhino, orangutan and elephant through interventions at  policy level, landscape level and community socio-economic level. Moreover, as already stated in the policies and procedures of grant disbursement of TFCA-Sumatera, the focus of activities give new impetus to cooperation between communities, NGOs, governments and the private sector in forest management and biodiversity.